100% secure
online shopping
FREE SHIPPING
On all orders!
Continental US
My cart
0 item(s)

How To Arrange Tiki Torches Beautifully In Your Garden

Tiki torches can make your garden more festive during summertime. Their flickering flames are not just exciting but comforting as well. Torches can provide your backyard with ambient lighting. They can even fend off those pesky nighttime insects like mosquitoes. But remember not to use citronella or other alternative fuel as this may damage your torches or worst result in an accidental explosion.

The design of our tiki torches feature thermophile technology that automatically relights the torch flame if it should blow out. You also don't have to worry about sudden rain since they come with glow plugs and built-in hot surface ignition that helps resistance of being extinguished by rainfall.

Our tiki torches are an affordable alternative for livening up your dinner, barbecue, or pool party, and you can use them throughout the summer. However, just like with anything that involves an open flame or fire, you should always be careful and practice caution during its installation, and while handling and storing them.

Before installing and twisting them into your ground, consider the tiki torch tips we have here for a more appealing outdoor space. 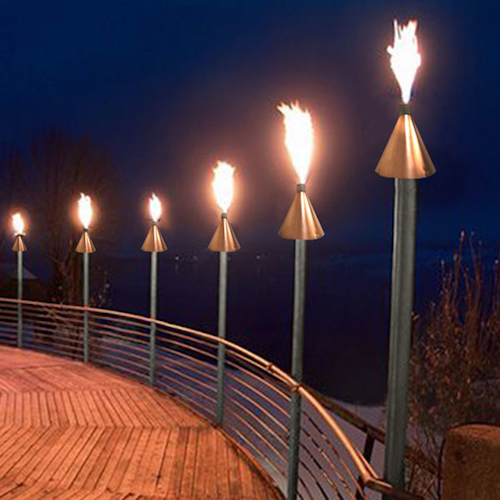 Use tiki torches to outline the dominant features of your garden. You can space them out to line both sides of your stone walkway. You can also do the same thing around your above-ground deck or swimming pool.

Make sure there's a space of at least three to four feet in between the closest table or chair and your tiki torches. Your guest will find the heat and smell of its flame a bit overwhelming if they're very close to the torches.

Consider placing your tiki torches in places in your backyard where bugs gather the most such as near trees or a few feet from your porch light. Keep in mind not to place them directly under trees or too close to branches though. The last thing you want is to create a fire hazard.

Tiki torches should be used sparingly. Also, before setting them up, assess the size of your garden. Five to six tiki torches are enough for a small yard. Lighting a dozen pieces of torches in a small space is not just dangerous, but it will also reduce the free space for your guests and the entire family to move around. 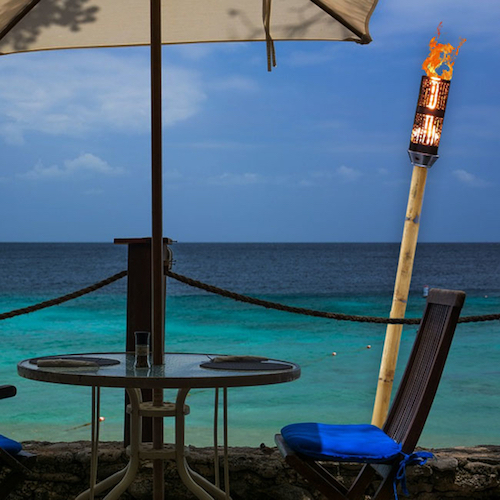 Evenly space out your torches. It will look absurd and awkward to place a tiki torch in the farthest corner of your patio and a set of four near the tables and chairs. It's also an ineffective way of getting rid of mosquitoes.

Use your artistic and creative side. Do not be afraid of putting some thought into the arrangement of your tiki torches. Sure, they emit light and heat, as well as repel insects, but they're also decorative pieces. When arranging them, treat them as if they are pieces of furniture, and you will love the outcome.

Push the spiked end of your torches at least six to eight inches into the ground to ensure they are stable. For added stability, consider using a torch stand or stake. You may also dig a hole for every weatherproof tiki torch with removable heads you have. Use cement to backfill them once you've set every pole.

You have to be extra careful when cleaning your torches and storing them for later use. Make sure they're in an upright position in your storage area. Secure them so that they will not tip over. Your storage should be cool and away from any possible flame. Only store your torches outside or in a shed with no insulation if you live in an environment where unused fuel will not freeze up.

If you have any general questions while reading this blog, whether it may be generalized or specific, please fill out this brief form so one of our staff members can review and respond to all the questions you may have! If you post your questions in the comment section, our team has no way of knowing where to contact you. This will make sure you will receive a response in a timely manner! Please reserve the "Comments" section for comments only, and if you have any questions, please follow this link!

Fill out the questions form here!